Speaking on The 8th Wall podcast Tom Emrich (Twitter) shares his views on the key Augmented Reality trends for 2022.

Kicking off the talk Tom describes 2022 as being a peak year for the Metaverse, the next iteration of the Internet that will be achieved through the unified convergence of the Blockchain, IoT, AR / VR and AI.

This peak has been characterized through many investments into the sector and a realization of the potential by corporate brands.

From 4m:50s Tom begins to look at the individual trend of AR hardware, beginning with the smartphone. Due to advancements in chips, displays, cameras, WiFi speed increases and massive changes in form factors such as the Samsung Fold, 2022 has seen a major leap forward for the role the phone will play in AR. 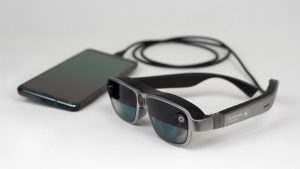 Another key trend he sees is glasses and headsets, highlighting the important point that this will further emphasize of the role of the smartphone not diminish it, such as the fact glasses will plug in to phones for AR features, to offload the compute requirements to the phone.

Tom describes this as “connected eye-wear”, showcasing an example of the Qualcomm Snapdragon XR1.

At 9m:25s he focuses on mixed reality headsets that enable both VR and video passthrough AR, highlighting important industry developments such as Meta updating the Quest 2 with an experimental API for mixed reality mode. Tom expects these headsets to target the upper end of the consumer market, for living room not outdoor experiences.

From 12m:10s Tom moves on to infrastructure, stating that connectivity is essential to AR experiences, with the growing adoption of 5G being a major shift forward, adding that a critical dimension of this is activation of the ‘C-Band‘ frequency. He expects early roll out of this in 2022 expanding into nationwide coverage through 2023.

Another major evolution is the opening of a sixth gigahertz band for Wifi, ‘Wifi 6‘, the biggest spectrum addition since 1989, for which you will need devices that support it. This will greatly improve speed and latency, important for AR, and enable new modes of device interconnectivity in the home for example.

At 14m:50s begins to look at software and the web, in particular the role of the browser in AR/VR.

Tom highlights the success of The 8th Wall in this scenario, where over 50,000 web apps have been created, with over 1,000 being experiences for top brands. To learn more check out 8thwall.com/discover.

He sees 2022 as being a big year for accelerating the ‘Spatial Web‘, with Web AR and Web VR in high demand, for a number of reasons including the Metaverse centred around the browser, where Tom anticipates developments that make browsers more able to discover and interact with immersive content.

The second platform trend he talks about from 18m:05s is the increasing sophistication of more complex and contextual AR experiences, unlocked through advanced tools being made available to developers, citing an example of Snap enabling the creation of custom landmarkers with LiDAR scanners.

From 19m:35s he moves on to the last of the platform trends, a focus on creators and developers and how they can be empowered to succeed as AR entrepreneurs, via ideas such as matchmaking for example.

At 20m:47s Tom begins the final trend section of consumer solutions, encompassing major markets such as advertising, often one of the first industries to harness new tech trends like mobile and social and now the Metaverse.

He sees a number of brands intelligently using the technology to achieve large scale web engagements that drive sales, with key advanced being display ads that can be better personalized to users through AR.

Tom then looks at QR codes at 24m:05s, describing how they tie in to this trend. For example Pepsi presented QR codes during the Superbowl which led to an AR portal featuring The Weekend. VW and Amazon collaborated to send out boxes with a QR code that led to an AR experience. He expects this approach to become ubiquitous and always on.

From 27m:00s Tom then says that in the same way users will expect AR experiences tied to things they’ll expect the same for places, with a key motivation being to encourage people to return to the outdoors following Covid, such as parks, stadiums and retail spaces, aka The Real World Metaverse.

This is ‘Location Based Entertainment’, an AR experience that requires attendance at a specific place, with an example provided of Samsung’s Dreamground.

From 29m:15s Tom explores the relationship of AR to e-commerce, where he believes it will evolve from one-off novelty features such as virtual try-on, to becoming a foundational pillar for all retailers. One example of this the development of API integrations with their e-commerce systems, such as CMS and ERP applications.

He cites a keynote case study of Saatchi art, and how they are utilizing “View in a Room” WebAR to allow customers to view over a million works of art in their home before buying online. This resulted in consumers who used the WebAR feature were four times more likely to purchase and purchased 17% more than those who did not.

He highlights how user profiles are evolving from a simple personal picture through the use of NFTs and new ventures like Ready Player Me, which enable the portability of profiles across multiple virtual world environments.

An example of digital twinning he provides is how Gucci is enabling the creation of ‘virtual goods’, the online equivalent of their offline products. Tom identifies a super hot trend of the intersection of NFTs and AR to accelerate this trend. Can You Upload Your Mind & Live Forever?